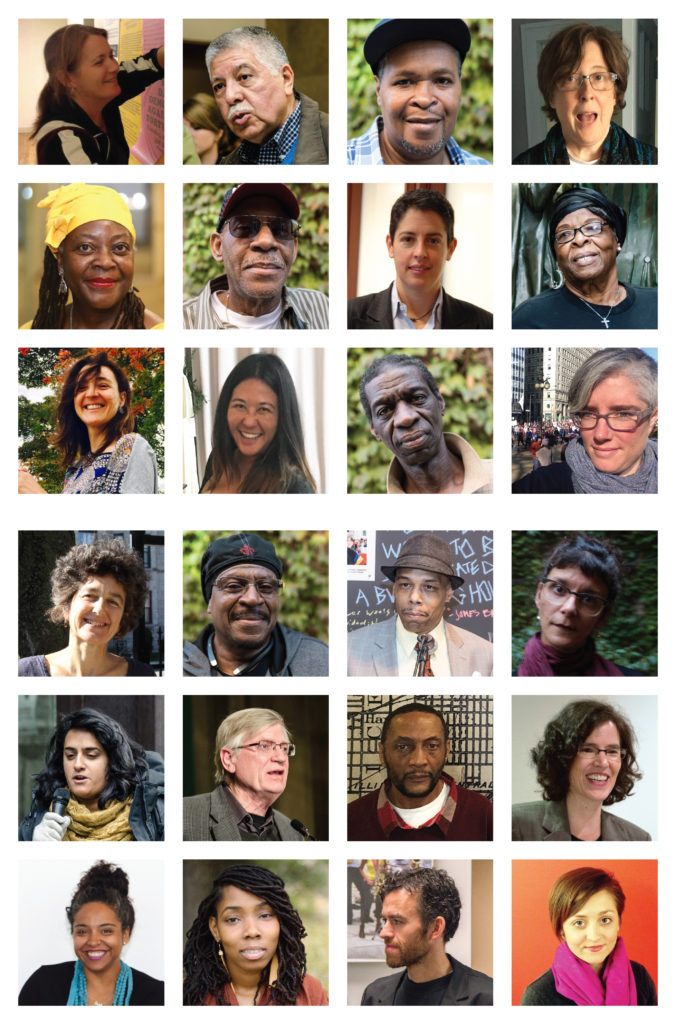 Dorothy Burge is the Internship Coordinator for Associated Colleges of the Midwest. She also teaches seminars on systematic racism, criminal justice, and social problems.

Sali Vickie Casanova, educator/artist/activist, is a member of the US Human Rights Network and Black People Against Police Torture. Much of her cultural work with youth and educators confronts abuses of justice in the U.S. juvenile system especially in communities of color. She holds the MAT (Master of Arts in Teaching) from Columbia College, MBA and BA degrees from Indiana University, and recently received the Award for Excellence in Urban Studies and Community Development from IU Northwest. Ms. Casanova's efforts as teaching/performing artist are dedicated to empowering youth and activists to transform the movement for social justice and human rights.

Adam Green is Associate Professor of History and the College and Master of the Social Science Collegiate Division at The University of Chicago, concentrates in U.S. history and African American history. He is author of Selling the Race: Culture Community and Black Chicago, 1940-1955 and co-editor of Time Longer Than Rope: A Century of African American Activism. Adam has lectured on campuses and community venues, and has appeared on WTTW (PBS) Chicago, WBEZ Chicago (radio), Al-Jazeera, BBC (radio) and C-SPAN. He’s been involved in community initiatives in New York, Chicago, and Los Angeles related to police accountability and educational justice.

Alice Kim is a cultural organizer, writer and a longtime anti-death penalty and criminal justice reform activist. She is on the editorial board of In These Times magazine and the advisory board of the Children and Family Justice Center at Northwestern University Law School. She is also the director of The Public Square, a program of the Illinois Humanities Council, that creates spaces for public conversations about social, political and cultural issues.

Carla Mayer's primary work focus is as an arts administrator and program manager for a municipal agency. She is a committed youth developer and creative activist. As an installation artist and sculptor, her work focuses on silenced voices, elemental materiality and including non-artists in the process of art-making. She has a master’s degree in interdisciplinary art from Columbia College, a bachelor’s degree in literary theory from Brown University and is a state certified art teacher.

Joey Mogul, is a partner at the Peoples Law Office in Chicago, Illinois and director of DePaul University' civil rights clinic.  Mogul has been involved in the campaign for justice for Chicago police torture survivors for the past twenty years both as an attorney and as an activist.  Mogul was one of the founding members of the Campaign to Prosecute Police Torture and traveled to Geneva, Switzerland to successfully present the Chicago police torture cases to the United Nations Committee Against Torture in 2006. Mogul developed the initial idea of CTJM and later drafted the reparations ordinance on CTJM's behalf filed in Chicago's City Council in October of 2013.

Laurie Palmer is an artist, writer, and teacher. She has shown her visual work, which takes various forms as sculpture, installation and public projects, nationally and internationally, and she has published her writing in art journals and as independent projects. Her work has received support from the Louis Tiffany Foundation, the Illinois Arts Council, the Richard H. Driehaus Foundation, The Graham Foundation, the ArtCouncil (now Artadia), and the Radcliffe Institute. Palmer teaches in the Sculpture Department at the School of the Art Institute of Chicago.

Amy Partridge is an artist, activist, and Associate Director of Gender Studies at Northwestern University. As a Mess Hall "key-holder," she has organized events, exhibitions, and extensive collaborative projects with Iraq Veterans Against the War/Warrior Writers, Tamms Year Ten, White Rose Catholic Worker, Sewing Rebellion, AREA, Project NIA, and a reading group with Danville prisoners. She is a collective member of Cheap Art for Freedom Collective, Midwest Radical Cultural Corridor, and the Slow-Motion Research-Action Collective. From 2009-2011, she was a community representative and Chair of the "Arts & Other" Committee in the 49th Ward Participatory Budgeting Process.

Mary Patten is a visual artist, video-maker, writer, educator, and political activist. In all her work, she seeks to address collisions as well as alignments between the worlds of “politics” and art-making. Her book-length essay, Revolution as an Eternal Dream: The Exemplary Failure of the Madame Binh Graphics Collective, was recently published by Half Letter Press. She has exhibited and screened her work widely, and has directed, curated, and participated in many large-scale collaborative art projects for over thirty years, including Pathogeographies (with Feel Tank Chicago), “Depression: What is it Good For?” at the Gene Siskel Film Center; Project Enduring Look; Group Material’s “Your Message Here” (with ACT UP/Chicago); Artists’ Call against Intervention in Central America; and Cityarts Workshop. She teaches in the Film, Video, New Media, and Animation Department at the School of the Art Institute of Chicago.

Sarah Ross is an artist who creates forms like clothing, signage and postcards to visualize struggles around space, class, access, and gender.  She often works collaboratively on projects such as Compass and Regional Relationships. Sarah teaches at The School of the Art Institute Chicago and works with incarcerated artists at an Illinois state prison. Images and ideas can be found at www.insecurespaces.net

Shubra Ohri is an attorney at the People’s Law Office where she represents people who have suffered from police misconduct, government misconduct, and wrongful convictions. In her work as an attorney she seeks to promote international human rights principals.  Shubra attended the 2014 United Nations Committee Against Torture session to urge the Committee to support the reparation ordinance. The Committee ultimately recommended that the United States provide redress for the Burge torture survivors by supporting the passage of the ordinance.

Ellen Rothenberg's work is concerned with the politics of everyday life and the formation of communities through collaborative practices. She is a recipient of grants from the NEA, the Bunting (now Radcliffe) Institute, Engelhard Foundation, LEF Foundation and the Illinois Arts Council. Rothenberg's work has been presented at London's Royal Festival Hall; Neues Museum Weserburg, Bremen; National Museum for Contemporary Art, Bucharest; Museum London, Ontario; Museum of Contemporary Art, Chicago; Boston's Institute of Contemporary Art and Museum of Fine Arts; and CUNY’s James Gallery NYC; among others. Rothenberg teaches at the School of the Art Institute of Chicago.

Ben Stagl is an interdisciplinary artist, industrial designer, and community educator. His projects range in scale from the intimate to the civic scale and are informed both by a thurough understanding of classical traditions as well as a passion for advanced digital practices.  Stagl is largely concerned with how humans continue to address and experience the commons.  His projects have received support from the Oregon Arts Commission, the Regional Arts and Cultures Council, The Portland Institute for Contemporary Art, The Oregon Museum of Science and Industry, The Chicago Pop-Up Loop Alliance, the Urban Institute for Contemporary Art, and the Chicago Cultural Center. Stagl instructs workshops at colleges around Oregon and Illinois and he currently directs development at West Supply in Chicago and practices design with his collaborative studio ChiLab.

Brett Stockdill is an educator, writer, and activist. He is an Associate Professor of Sociology, Women’s Studies, and Latino & Latin American Studies at Northeastern Illinois University.

The Advisory Board for the CTJM project include: