CHICAGO| May 15, 2019 — Chicago Torture Justice Memorials (CTJM) an artist and activist-led collective started in 2010 to fight for justice on behalf of the Burge torture survivors, is one step closer to fulfilling all planks of the unprecedented reparations legislation passed by the City of Chicago in 2015. The final component of the legislation is the creation of a public memorial to the Burge torture survivors. Chicago artists Patricia Nguyen and architectural designer John Lee have been selected by CTJM jury members based on the design they presented at ‘Still Here: Torture, Resiliency and the Art of Memorializing’, a public exhibition hosted by Arts & Public Life in Washington Park. The exhibition served to bring further awareness to the struggle for justice for the over 125 Black and Latinx men, women and youth systematically tortured by former Chicago Police Commander Jon Burge and the men under his command at Chicago Police Headquarters from  1972 to 1991.

Four years ago this month, on May 6, 2015, the Chicago City Council passed the Reparations for Burge Torture Victims Ordinance and resolution. The permanent public memorial was an integral piece of the legislative package intended to ensure the racially motivated torture and the history of the struggle for reparations and justice is never forgotten.

“We insisted the reparations legislation include a memorial to the Burge torture survivors to ensure this racist state violence is inscribed in Chicago’s landscape, said Joey Mogul, co-founder of CTJM.  As a city, we have an obligation to publicly acknowledge and condemn this racist state violence so that we never forget the evils that occurred here and to inspire us to continue fighting racism supremacy.”

Anthony Holmes, one of the first people to be tortured by Burge, said, “Burge and his men tried to silence us when they tortured and convicted us.  We will not be silenced, we are still here, and this memorial is a marker to the world that we survived and spoke the truth about what occurred to us.”

While most the historic reparations legislation package has been implemented Mayor Rahm Emanuel refused to provide funding for the public memorial.  Now, CTJM and others are requesting Mayor Lightfoot to fully fund the memorial. The Arts and Culture Transition Team has also recommended Mayor Lightfoot and the City Council fully fund the memorial within the first 100 days of Mayor Lori Lightfoot’s administration. (Cultural Bill of Rights, p 32).

“Listening, communicating, and responding to the various needs of this constituency was a complicated process,” says Romi Crawford, a CTJM jury selection member and professor at School of The Art Institute. “ I learned from it tremendously and realize that each event or scenario that a memorial record has its own exigent needs.” 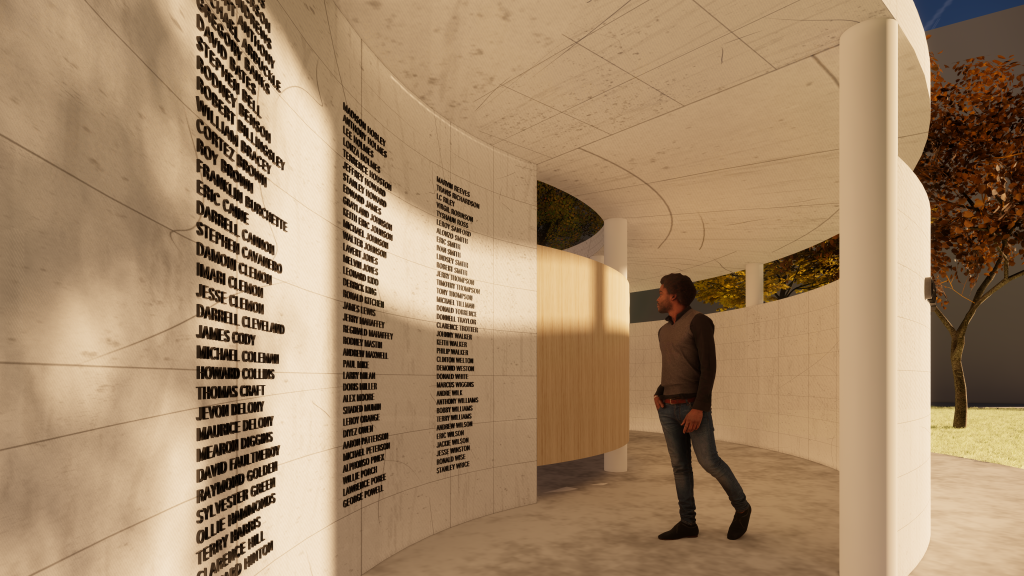 Patricia Nguyen, a Chicago-born performance artist, co-founder and executive director of Axis Lab, an Uptown community arts organization, and her collaborating artist, John Lee, a California-born designers who has lived in Chicago for ten years produced a model memorial that examines the historical remnants of police torture and offers reparative space for communities to heal. “We wanted to create a structure and platform that is community-based, so people who engage with it can “discover” and process the details of the memorial itself,” says Nguyen.

“Breath, Form & Freedom” is 1600 square feet with a winding hallway that is twelve feet wide and features the names and dates of victims tortured by Jon Burge and his police in his Midnight crew. The open ceiling boasts a 16 feet high threshold providing ample natural light and a sky view. Intended to be constructed in a park setting, the memorial will provide a natural extension into public space giving its visitors a more natural and fluid experience. 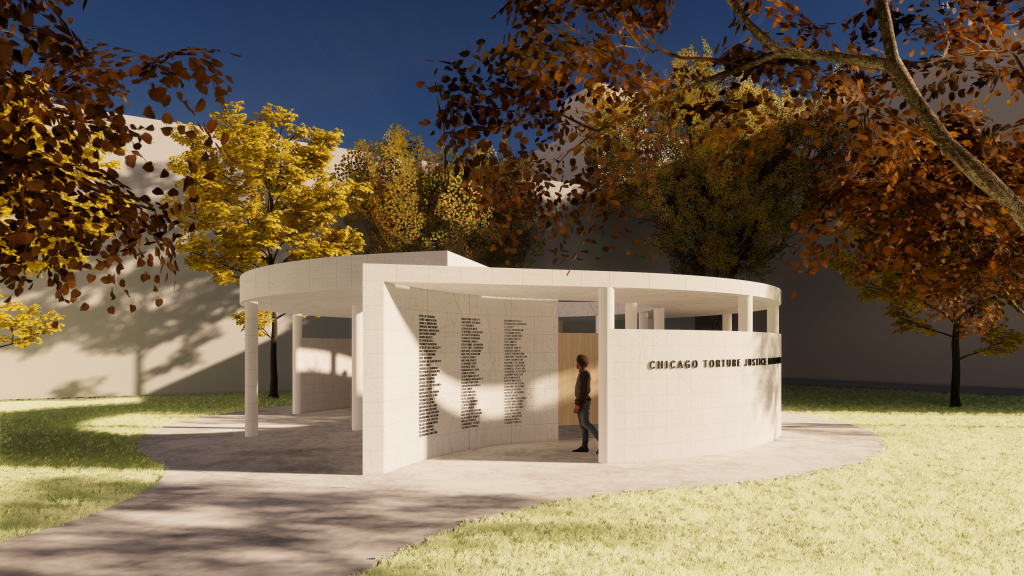 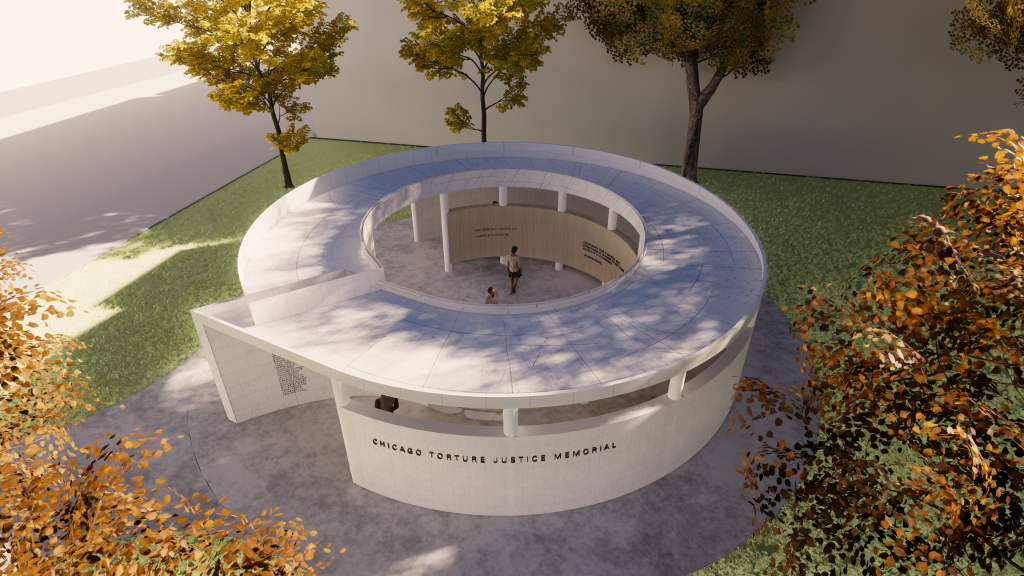 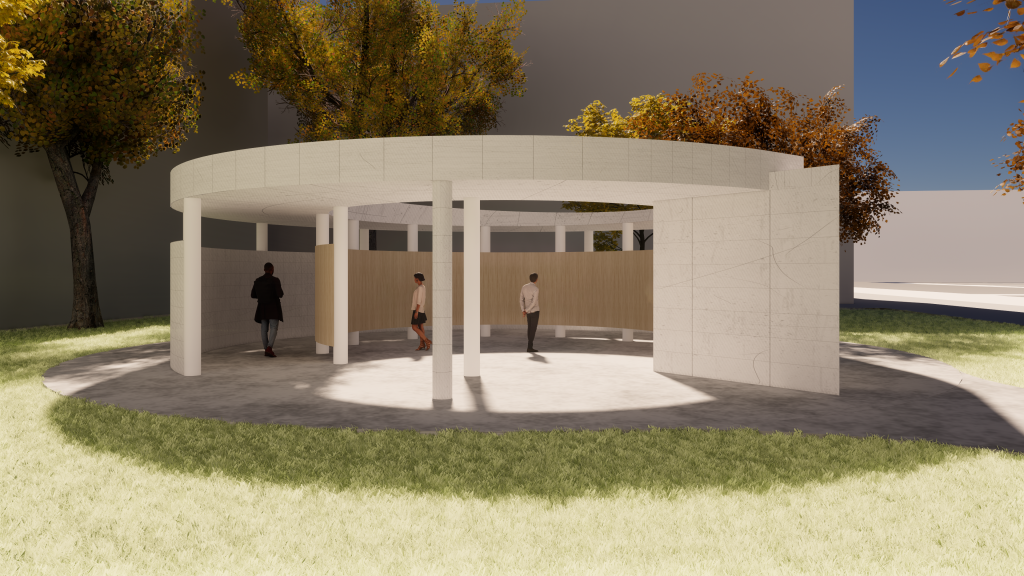 “There were certain non-negotiables we adhered to for this project”, says John Lee. “The timeline of tortures takes you through the journey of the reparations ordinance starting with the fight for justice but it doesn’t end there. We wanted to bridge those events to a community gathering space that allows for contemplation, reparative and restorative activities like meditation, contemplation and creative writing.” A part of the memorial’s design includes allowing visitors to leave their written reflections on the scaffolding of the memorial which Lee and Nguyen hope will establish a deeper sense of unity within the community. 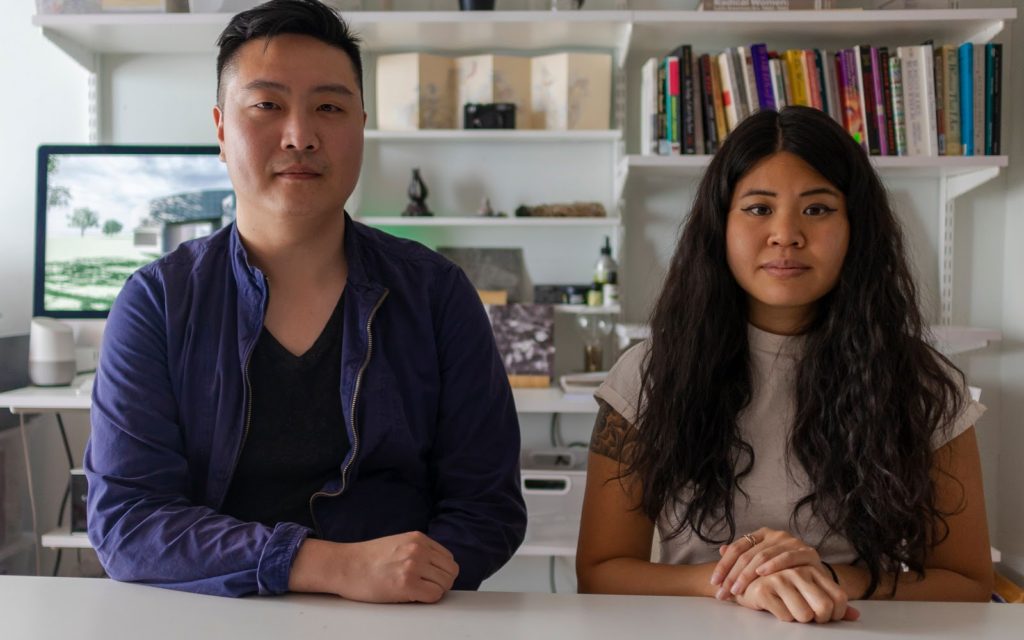 The following statement was submitted by Patricia Nguyen and John Lee in response to being selected as the winning design for the future Chicago Torture Justice Memorial:

We are deeply humbled with the great honor of building the Chicago Torture Justice Memorial to center the stories of survivors, archive the struggle for reparations, and create a community space in the continued fight for justice. We would like to send our heartfelt gratitude to the survivors, Chicago Torture Justice Memorial Project (CTJM) members, Chicago Torture Justice Center (CTJC), the Arts Incubator staff and curator, Hannah Jasper, and all organizers and collectives involved in this larger struggle for freedom. Words alone cannot describe how meaningful it was to be involved in exhibiting our proposal alongside such phenomenal artists and designers in Chicago who each have created incredibly thoughtful and powerful work.

As artists, we ask ourselves, “What is our role as cultural producers in the face of continued war, police brutality, mass incarceration, and poverty in our nation’s history?” For us, connecting the history of slavery, international wars, and domestic policies that criminalize poor and working-class communities of color to resilient transnational struggles for liberation was a critical point of departure in defining what this memorial can offer as a public archive and educational platform for all generations. We envisioned a monumental anti-monument, where time does not stand still within the memorial to commemorate a history as past, but a past that is still present and its scale as undeniable. We hope to honor the survivors, both those who have come out and those who are unknown with this memorial and affirm that they are, in the words of Anthony Holmes, “still here.”

*Special thanks to survivors and freedom fighters, Mark Clements and Anthony Holmes, who were a critical part of the in the studio visits with artists and conversations with CTJM.

Patricia Nguyen is an artist, educator, and scholar born and raised in Chicago, Illinois. Her art practice emerges from a place of departure, rupture, presence, and possibilities as a child of refugees. Through embodied research, performance, installation, and community engagement she explores ecologies of freedom, carceral states, migration, borders, torture, nation-building and war to reveal histories of violence and imagine decolonial futures. Dr. Nguyen has published work in Women Studies Quarterly, Harvard Kennedy School’s Asian American Policy Review, and The Methuen Drama Anthology of Modern Asian Plays, and Women and Performance. She is currently an Assistant Professor of Instruction in Asian American Studies at Northwestern University, where she received her Ph.D. in Performance Studies.

Dr. Nguyen has over 15 years of experience working in arts education, community development, and human rights. She has facilitated training and workshops with Kuumba Lynx, Chicago Public Schools, The Fulbright Program, American Center at the U.S. Embassy in Vietnam, Jane Addams Hull House, Asian Human Services, and 96 Acres on issues ranging from state violence, forced migration, mental health, youth empowerment, and language access. She has exhibited and performed at the Nha San Collective in Vietnam, Mission Cultural Center in San Francisco, Jane Addams Hull House, Links Hall, Prague Quadrennial, Museum of Memory and Human Rights in Chile, and Museum of Contemporary Art Chicago. Dr. Nguyen also serves as the co-founder and executive director of Axis Lab, an arts organization that focuses on inclusive and equitable development for immigrants and refugees.

John Lee is an architectural designer and photographer who has lived in Chicago for 10 years. Chicago continues to deeply shape Lee’s critical approach to architecture, as he foregrounds the importance of art and politics. Lee’s work ultimately seeks what mnemonic possibilities can arise in notions of home, displacement, and space through the built and natural environment. His work is committed to cultivating places of possibilities through architectural design, as material, form, and content conjure a deeply affective relationship to history, people, and an ongoing struggle for freedom.

Lee has a Masters in Architecture degree from the School of the Art Institute of Chicago. His design work has been featured at the Museum of Contemporary Art of Chicago, alongside commissions and recognition from established institutions such as Northwestern University, AIA Chicago, Art Works Projects, and recently published photographic work in the Chicago Reader.